For the last few months, Alex has been really looking for a hands-on project that would be for him. You know, not one of those “honey-do” projects that I seem to be really good at coming up with. Most of our projects start with me saying something along the lines of, “Man, I hate this laundry room. Wouldn’t it be nice if we had new tile and a fresh coat of paint in here?” Alex agrees and encourages me to go to Home Depot with him and we wander around until we have a good idea of what specific tile we want. It also seems like every time we’ve had a big project going on, he’s had some time off work and spends hours and hours every day (while I’m not home) working on some project that was my idea to begin with.

So again, he’s been reeeeally craving something that he could work on that was more…uhh.. manly.

He ended up deciding to build a woodshed that would keep all our firewood dry. He said he wanted to build it because he wanted the wood away from the house since wood attracts bugs, termites, etc. (which makes complete sense to me!) I’m pretty sure he also just wanted an excuse to lug those power tools outside and build something with his own hands.

Months ago, Alex found the plans he wanted to use and we hunted Home Depot/Lowe’s/other various lumber stores to get an estimate on how much the supplies would cost. The total was a little more than we wanted to spend on something that… you know… holds wood, but after much research we (and by we, you know, I don’t mean me) knew it would be less than a third of the price of pre-fabbed sheds and higher quality. So, all we needed was a nice weekend to get the motivation to crank this bad boy out.

I would also like to add that I thought this project would be a “work on it when you could” kind of thing. Not.so.much. It ended up getting built over one weekend and stained the following. However, I will say that Alex had some help from a good friend, Dan, and really wanted to take advantage of the extra set of hands (and we couldn’t be more thankful for all the help)!

I wasn’t even home during the first day of construction so I don’t have a lot of the very early pictures… but here ya go! 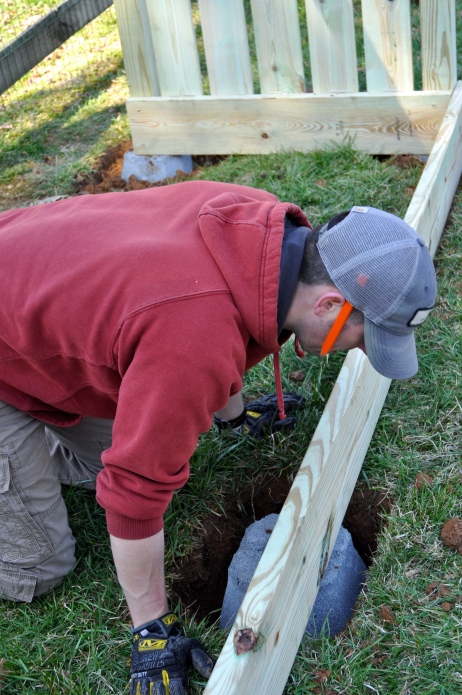 This was what it looked like the morning of day two.

(of course, you know that we didn’t leave all those supplies out over night….) 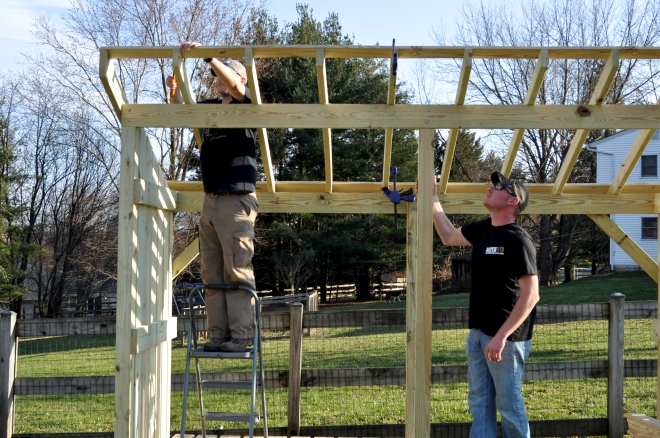 By the end of the first weekend, we had a shed that looked like this…

All we had left was to stain it and add the roof. So, the following weekend (yay for nice spring days!) we got to work… And yes, this time I do mean WE. Unfortunately I don’t have any pictures that were taken in the middle of staining. We were messy and dirty and bleeeeh, and I wasn’t planning to subject my camera to that 🙂

Alex putting on the roof — 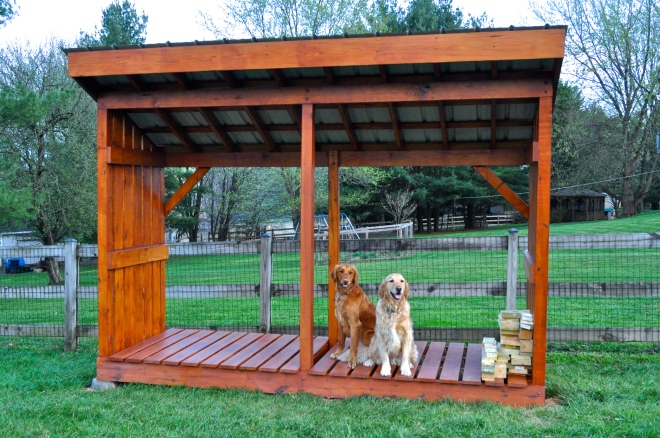 Aren’t those dogs amazing for posing for me *all on their own*? Haha… I wish!

Now we just need to fill up that shed with a bunch of firewood!

funny story: the couple that lives behind us had their granddaughter over during this building process. I guess they were nosey and wanted to know what in the heck we were building, so they sent her over to ask Alex. When Alex responded saying a woodshed… she said, “oh! I thought you were building a STAGE!”

Now I can’t get this stage idea out of my head! Could you imagine having a party and a band setting up there… UHHH. Perfect.

I should also mention that these two boys were the perfect helpers. Hunter even brought over Dan’s bottle of water to him. In his mouth. Sounds appetizing, right?

(I have to say one more time.. a biiiiig thank you to Dan for helping so much!)

2 thoughts on “A La Shed (of the wood variety)”

Pages to check out!

Error: Twitter did not respond. Please wait a few minutes and refresh this page.