I have a list of, oh, I don’t know, 39 things I’d love to chit chat about today. None of these little tidbits have any cohesion between them – so, get ready for a terribly random post. It’s definitely been awhile since I completely downloaded my brain on you, so I guess it’s about time I get started.

First — let’s get the party going with some music. I know this CD has been out for at least six months already, but… I just love it. Literally, I could replay every track over and over again and still look forward to hearing the same song again. Obviously, I have a small obsession problem. When I was a little girl, I used to watch Beauty and the Beast over and over and over. Not kidding. I would finish the movie and immediately rewind it, just to watch it six more times. I don’t know how I got from music to Beauty and the Beast… I warned you that this post would be random.

Alright, now that we’ve set the mood, let’s get to the meat of the post, shall we? 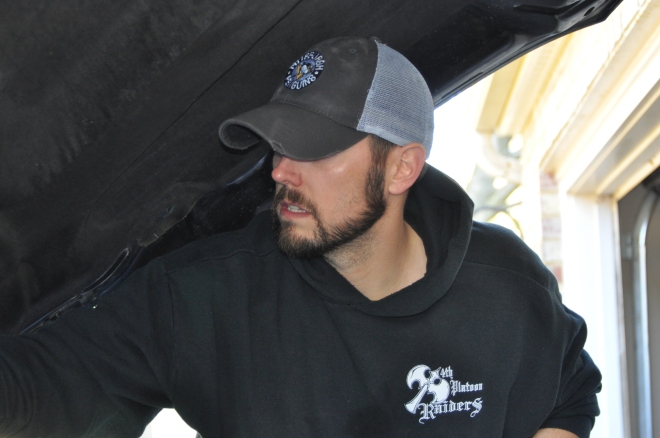 Just wanted to update our friends and family: Alex left Saturday mid-morning for a couple week long trip for work. I’ve pretty much grown accustomed to having him around all the time. Whenever I start to get sad or feel lonely, I try to remind myself that he was home for almost the entire year last year and before I know it, he’ll be home again. Crossing my fingers and toes for lots of safe and stress-free flights for him!

Since I had plenty of time to kill today, I decided to tackle some really fun tasks that I’ve been putting off for.. oh, well, forever. 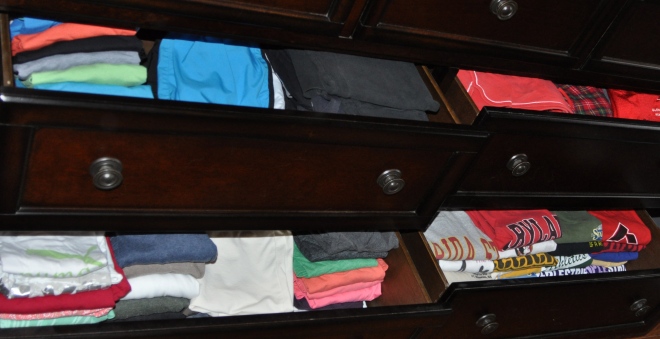 I took everything out of my dresser and night stand. I sorted through all my old crap, threw some stuff away and made a giant pile to take to Goodwill. Then I re-folded every single item and put the keepers back in my dresser. This hasn’t been done since we moved over two years ago! One thing I learned — 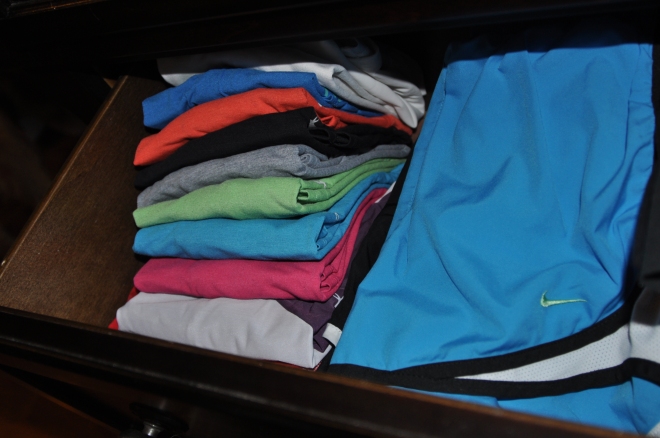 Apparently I like to dress in every color of the rainbow at the gym.

I also emptied my nightstand — which was really the biggest offender. Definitely not the most thrilling task for today… but! I found something (slightly important) throughout the ordeal. 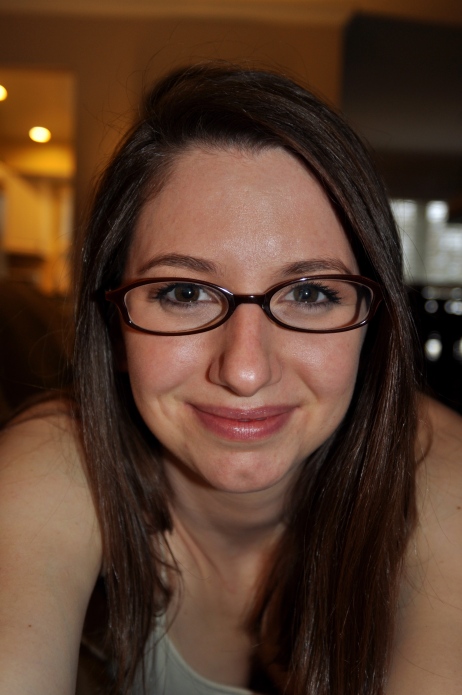 I also found my super fancy one-piece bathing suit that I bought freshman year in college when I decided that swimming for exercise would be my new thing. That lasted a good three days when I realized that… um.. swimming is hard! Now that the gym we belong to has a few pools (seriously.. a few) that bathing suit may come in handy. I also conveniently found some goggles (I’m not joking, these were in my nightstand).  After trying it all on, I may have cried a little. Uhhh. Let’s just say that it wasn’t my best look 🙂

This year, Alex and I decided that we would use a portion of our tax return on ourselves (imagine that!) Last year we had the bathroom fiasco, which pretty much sucked up our return. It actually felt pretty damn good to spoil ourselves instead of spending all our money on the house! He picked out some parts for his truck and I decided to get two new lenses for my camera. I’m sure you can imagine that I’ve had a lot of fun over the past few weeks playing around with them 🙂

This one is my favorite — 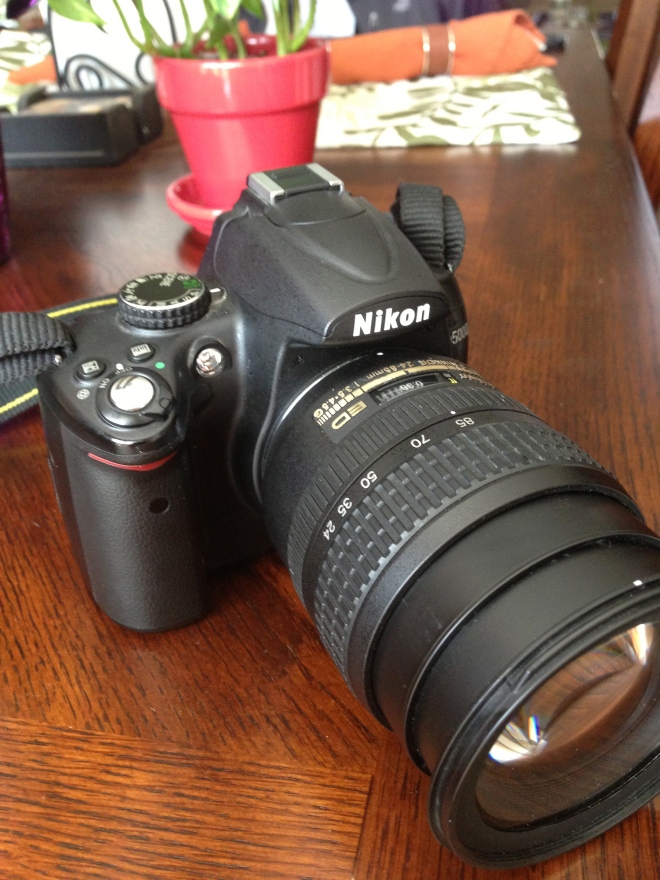 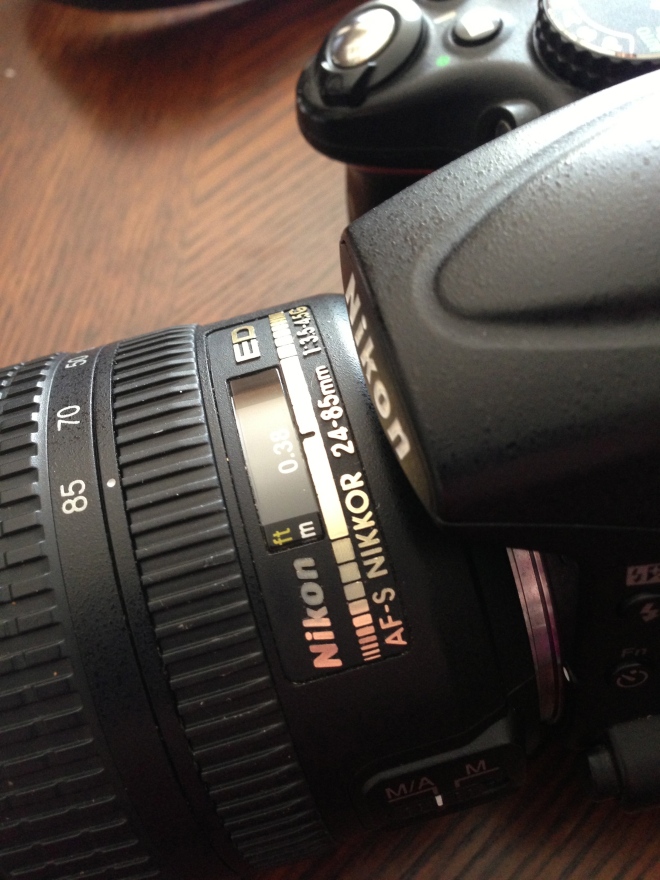 Yeah, it’s the bees knees. Here are a few pictures that I took with that bad boy. 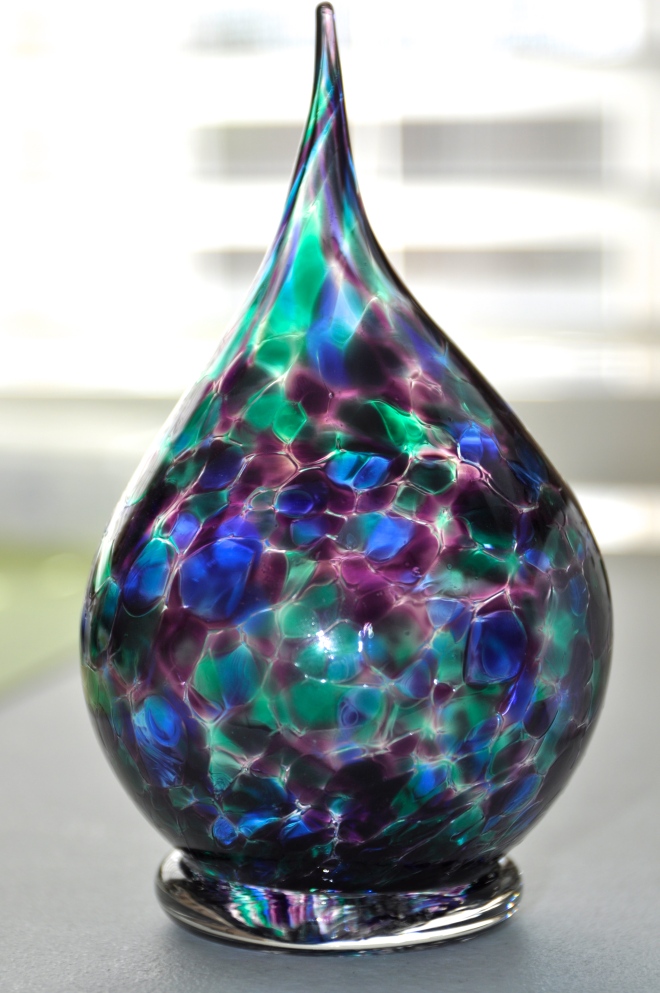 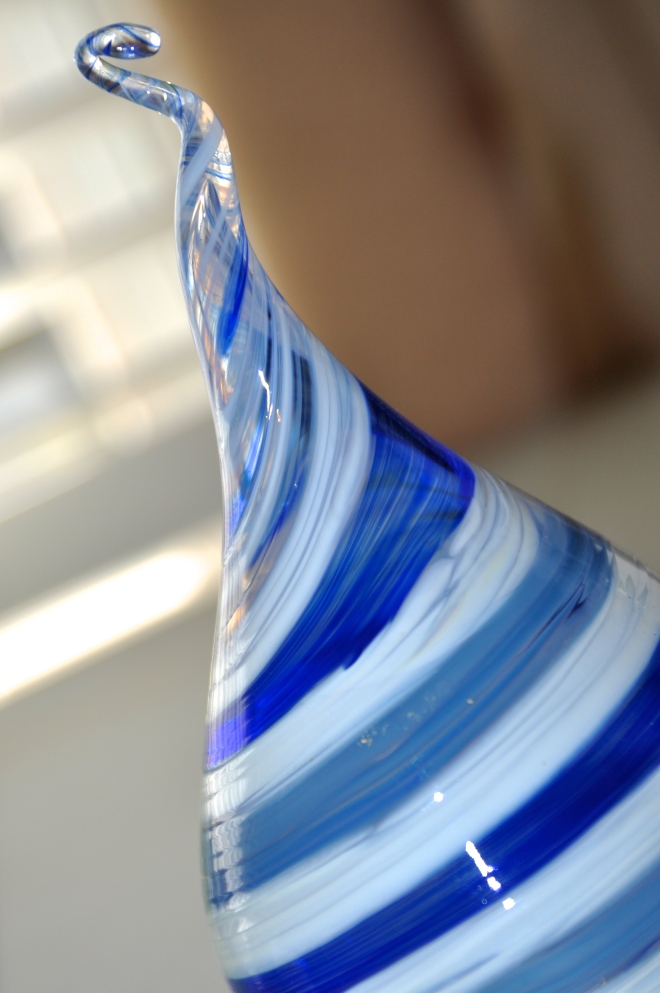 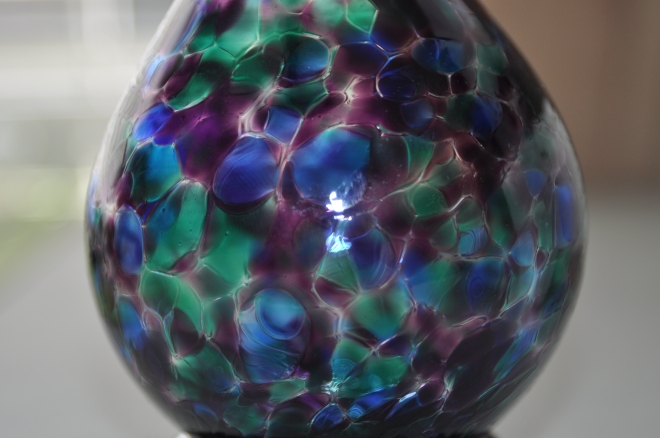 And the big ol’ truck that has stolen him from me.. Kidding… kind of 🙂 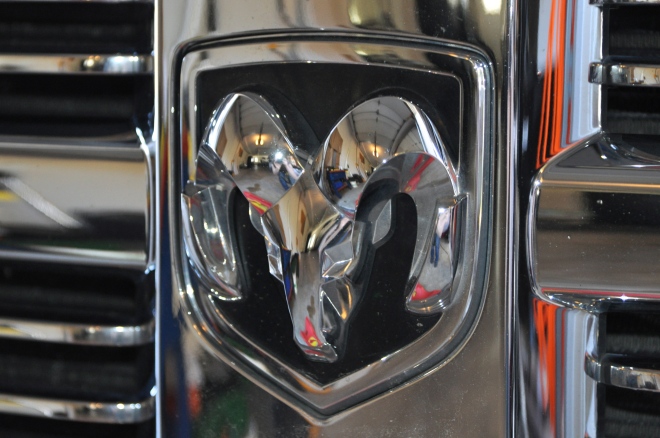 And this is the second, smaller fixed lens that I got. 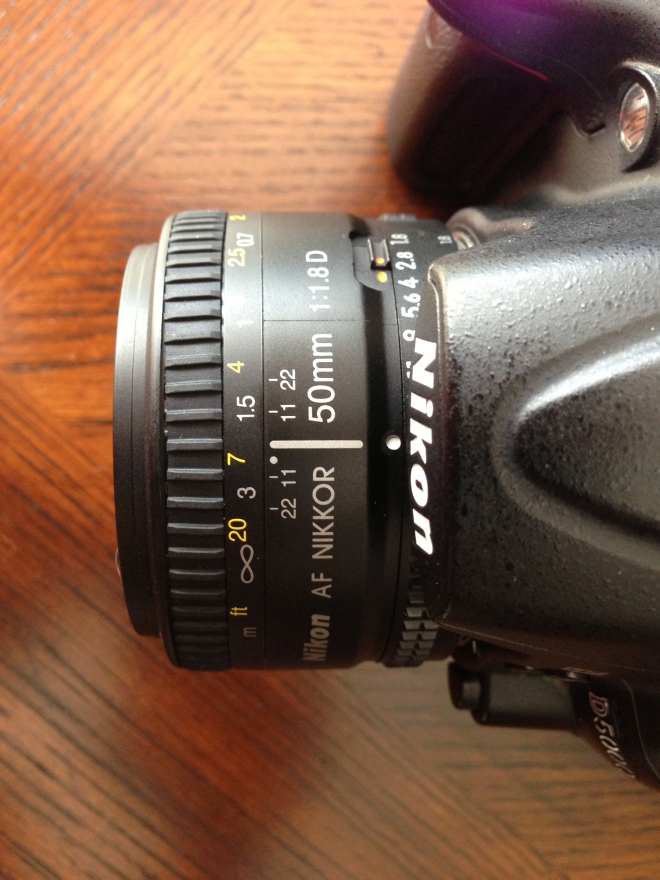 I still need some practice with these little man. Here’s one photo with the baby lens… 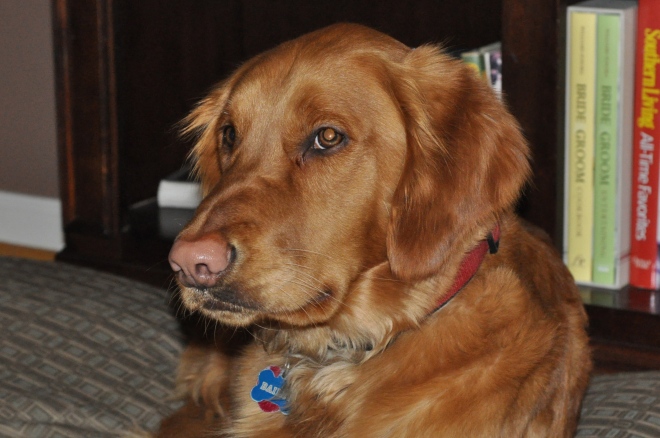 Has this post been random enough for you yet?

Yesterday my mom and I found these… 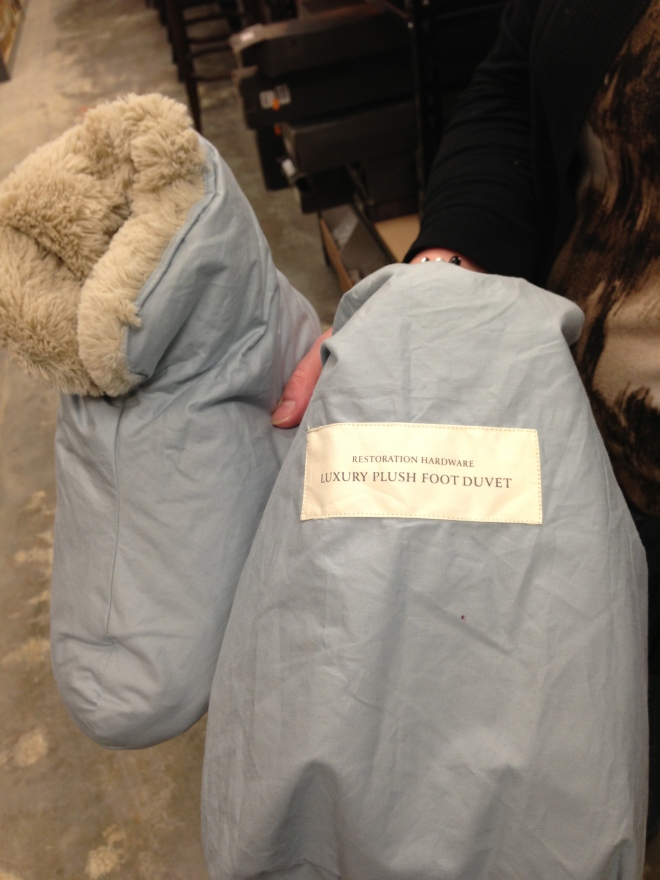 You know that I’ve since started calling my slippers “foot duvets,” right? I just can’t imagine a group of people sitting around a board room trying to think of a new marketing strategy for slippers. Literally someone got paid to think of the term “foot duvet.” Gosh, I’d love to sit next to that person on an airplane.

This picture kills me. 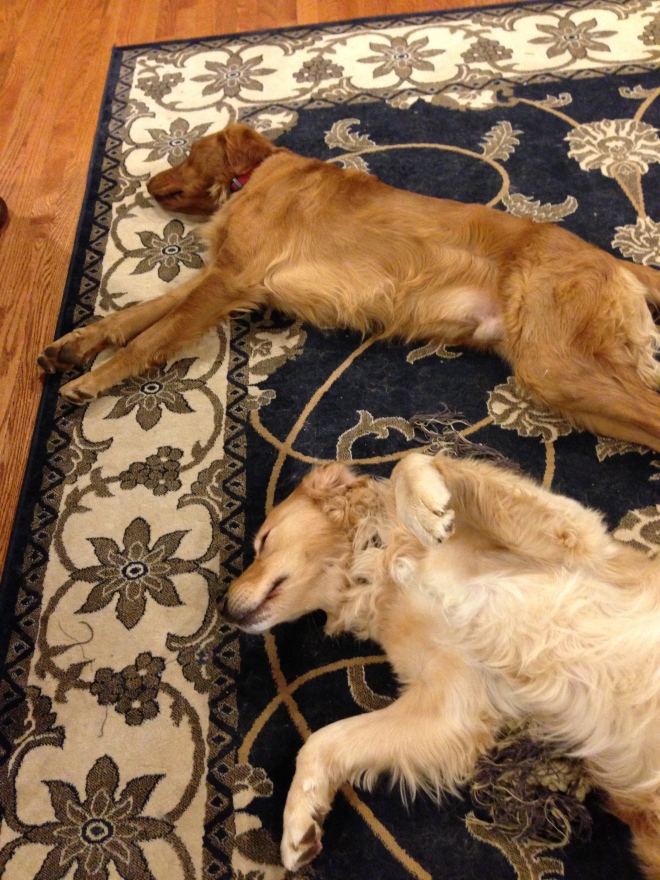 Alright. That’s enough random stuff for one night! I have some more though provoking posts coming up in the near future, I promise 😉

But for now, I have a very important date with a JUST CLEANED (I tell ya, I’m on top of it today) bathtub and it looks something like this! 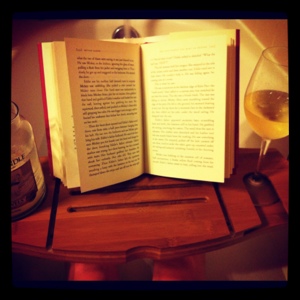 What music are you listening to? Any CDs you could never get sick of? Buying anything fun for yourself lately? Any other people spring cleaning?

Pages to check out!

Error: Twitter did not respond. Please wait a few minutes and refresh this page.